What is Eye pressure test?

It is a well-known fact that most medical conditions are much easily treated if they are caught in their early stages. Ocular conditions are no exception – especially since some of the most common diseases show little to no observable symptoms before they hit very hard. Thus, a regular eye exam becomes vital, even for those with perfect vision. Along with the traditional tests performed in this annual eye exam, there is one more which should not be skipped by any means: an eye pressure check. 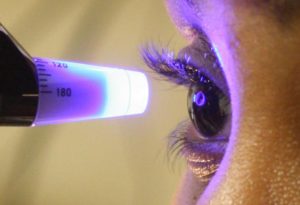 We’d like first to explain what eye pressure is. There are two kinds of fluids inside the human eye. Vitreous humor in the back, behind the lens, and aqueous humor in the front. Being liquids, they give the eye a specific “resistance” which can be felt much like that of a balloon – by poking it with an object (your finger, in the case of the balloon) and gauging the resistance. In the case of the human eye, a small device which shoots out air is preferred. For measuring this pressure, a unit called millimeters of mercury (mmHg) is used. The standard value for mmHg is between 10 and 21.

Thus, we can conclude that pressure in the human eye, called intraocular pressure (IOP) is considered “normal” between these two measures. High IOP causes issues with the optic nerve in most patients, which can lead to glaucomatous vision loss. While this high pressure isn’t always disease inducing, it does pose a high risk for developing glaucoma or converting from ocular hypertension (Elevated IOP) to glaucoma.

Eye pressure test is important because abnormal pressure usually has no symptoms unless in certain extremely elevated cases, so is important to uncover such abnormality. When developing open angle glaucoma, a patient doesn’t experience anything like red eyes or other symptoms, just a small peripheral vision loss which worsens over time and isn’t immediately noticeable. Thus, even people with perfect vision should take this eye test on regular basis. Glaucoma, when caught early, can be treated medically.

Eye trauma or certain eye surgeries (like cataract) are also known cause potential eye pressure abnormalities.  There are also certain demographics of people who are known to be at a higher risk of developing IOP abnormalities, such as those of African-American descent, those over 40 years of age, those suffering from nearsightedness and diabetes.  Moreover, some studies have shown that prevalence is more in women.

To sum up, a regular eye pressure check is a no-stress, non-invasive and easy way to catch one of the most serious ocular conditions in its early stages. Eye pressure is also used to gauge the efficacy of a treatment when managing glaucoma.  The yearly test is covered by most insurance plans and can be done at your local optometrist, so there is no reason to skip it in any way.

To schedule an Eye Exam with one of our optometrists please call or email our Scarborough office today.

Dr. Gavin Bastiampillai and Associates believe in being an integral part of our Kreon community.  When Toronto hosted the cheap nba jerseys Pan Am cheap nfl jerseys Games Dr. in the summer of  2015 from July 10-26, Dr. wholesale jerseys Gavin volunteered his time Islands giving free Remix eye exams to the athletes, trainers and […]

Blindness refers to a loss of vision that is not rectifiable by the use of glasses or contact lenses. Vision loss falls into two categories: Partial and Complete. This may occur suddenly, without warning, or over a period of time. In the United States of America, persons whose vision while wearing contact lenses or glasses […]

The importance of lid hygiene for blepharitis patients

Eyesight is just one of the issues which can direct a person towards an optometrist. It is the most common, granted, but there are plenty of other conditions or diseases which can cause discomfort and drastically reduce the quality of one’s life. Blepharitis is one of them. Although it can be easily detected through an […]

What is Colour Blindness and What Causes it? Difficulty distinguishing colours (blue and yellow or red and green) Colour blind people see things as clearly as other people but they are unable to fully ‘see’ read, green or blue light Inherited condition that affects males more frequently than females and this condition is related to […]